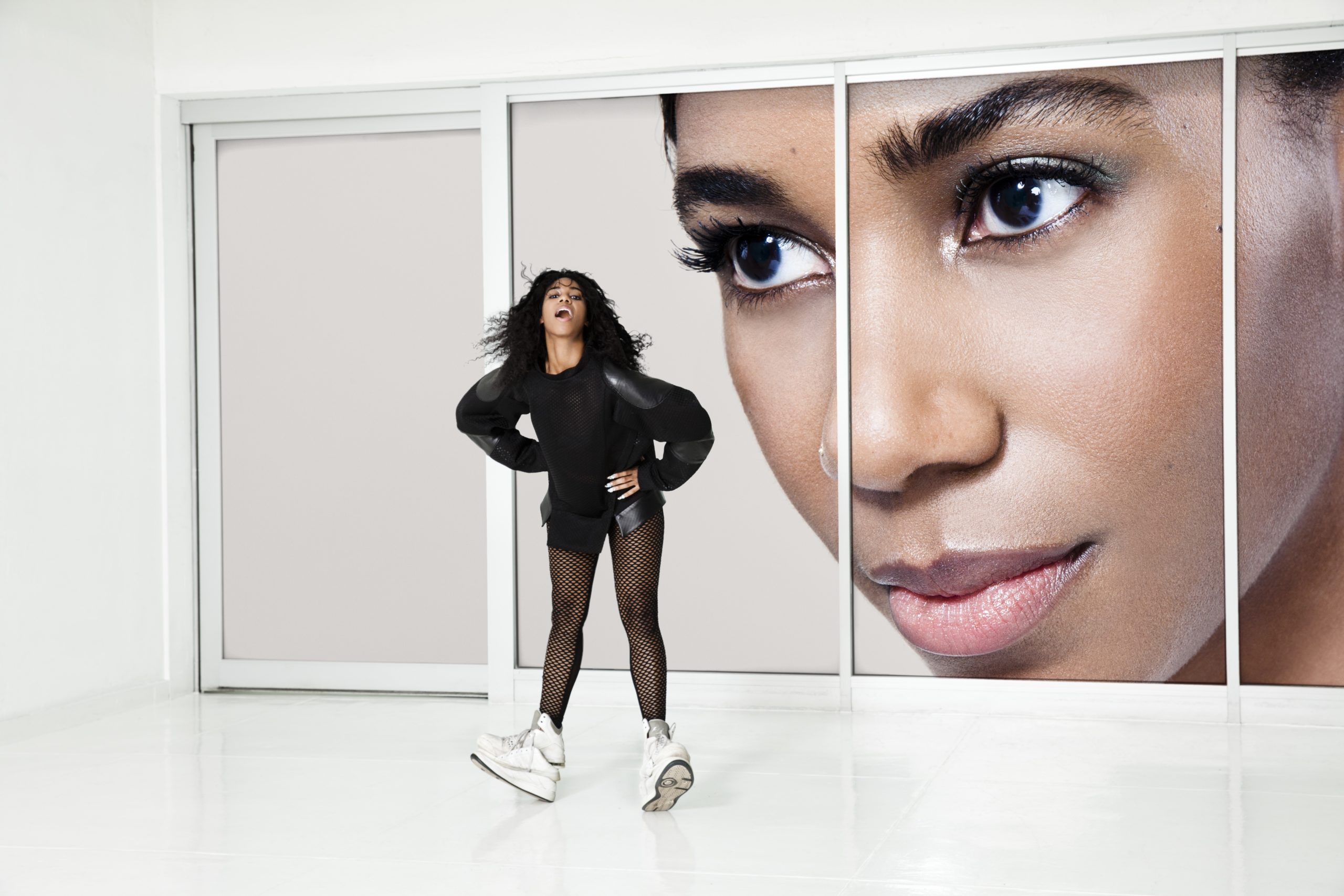 Santigold Searches for the Meaning of Pop Culture

The artist opens up about the difficulty of social media and keeping pace with technology.

On the phone, cozied up in the bunk of her tour bus, Santi White—better known to her fans as Santigold— has spent the fourth day of spring traversing a Colorado blizzard. Although stranded on the side of the road for nearly eight hours at one point, the bus pulled over at a truck-stop diner that had no power, White was still stumbling on inspiration. Rather than be depressed or discouraged, the singer wandered into what she compares to the set of a film: a dark room full of truckers with “tumbleweeds blowing by us…a moose head on the wall…the door almost blows off…It’s amazing!” It’s the 39-year-old musician’s self-described gift to be able to find inspiration in the most unlikely and random of things that is undoubtedly what makes her music an exceptionally interesting and varied landscape.

“If something captures my attention [then] it’s inspiring. Even like…trash on the street…That’s why I love New York so much: there’s no shortage of things to look at or experience or feel,” White says laughing. Her youthful ability to get excited and find fun and interest in the mundane is balanced by her wisdom, introspect and cultural awareness that verges at times on jadedness. Both sides of her personality are equally evident on her album, 99cents, that released in February of 2016. Her voice drops an octave when she starts talking about the motivation behind the album. While making it, White was confronted with the unavoidable reality of this impact on her life and career as a musician. “You’re making products that are basically being given away for free. And that puts us in this weird situation now where there’s an insane amount of marketing and pushing of your brand that’s going on just to try to make a living at what you’re doing. The experience of being a musician has changed so drastically because of it, and it’s in my face.”

Not one to be easily daunted or to back down to a challenge, she decided to tackle the monstrous issue head-on by using every social media tool at her disposal—no matter how foreign or challenging, or how admittedly exhausting and time-consuming the process. From Tumblr Q&As to Instagram interviews, her intentions went far beyond typical self-promotion. “It’s kind of a conflict that I have to deal with and come to terms with and I think this album is my way of coming to terms with [social media]…pretty much to embrace it, highlight it and make sort of a satire out of it. And at the same time just making it a very accurate portrayal of the time and culture for people to view and reflect on. Technology is moving so fast and it’s kind of sending us skidding out of control in this one direction…and we’re not steering. I think that’s dangerous.” White is quick to acknowledge that “there [are] so many other very serious and heavy, scary things happening in the world right now that it might seem disconnected to focus so much on [social media as an aesthetic], but if you look at the presidential race right now, I think a lot of the things I’m talking about on my record are very present in the way that people are treating the presidential campaign, where basically people are literally choosing a TV personality rather than a person.”

But will Santigold’s fans and listeners be savvy enough to detect her nuances and the underlying messages of 99cents? White admits there is only so much within her control, but she draws a comparison to the common early experience of misinterpreting lyrics: “I don’t know about you, but when I was little I used to sing lyrics wrong, so wrong, all the time. These songs stay with you your whole life until you revisit them and one day you’re like ooooh. I do have faith [that my fans] will find the meaning.”

For all of its weightiness, 99cents doesn’t exactly sound like a political album through its upbeat, sometimes candy-sweet and ultimately danceable pop production riddled with influences from rock to reggae. This is no doubt an indication of White’s own early exposure to artists varying from Otis Redding to Nina Simone, Madonna, U2, Bad Brains and Bananarama. Some of her musical upbringings began before she was even old enough to form memories of them, including seeing James Brown play live. She does remember one very formative Fela Kuti show though, as well as weekly Saturday trips to the record store with her older sister and father, who was an avid collector. White reminisces joyfully about the experience of being allowed to buy any record she wanted and sitting on her deck reading the lyrics on the record covers.

These days, the musician has a difficult time naming a single record that she has enjoyed in its entirety and is clearly frustrated by the unrealistic expectations that “corporation artists” put on the average musician. In drastic situations, it can even set them up for disaster. For instance, recently the last-minute expectation for Santigold to orchestrate a three-story-high video projection for a private gig is the perfect example of what White and her peers are up against. “And by the way,” she says in disbelief, “a video projector costs $30,000.”

“It’s honestly almost undoable for a human being. The technology dictates the pace and it’s hard to keep up with. I’m watching artists all around me burn out, and it’s sad because I don’t think that people realize what they’re asking of the artists.”

White is still just one person, despite what she may lead us to believe from the literal multiplication of her likeness in performances of the single “Can’t Get Enough of Myself” printed on T-shirts for her performance on The Tonight Show Starring Jimmy Fallon and plastered on the set’s walls on The Ellen DeGeneres Show. Santigold truly plays up the woman or superwoman duality as an artist. Santigold the artist seems to possess an almost superhero-like confidence and strength exponential to her actual singular existence and in spite of the endlessly shifting obstacles, it’s not unlikely that White will be able to summon the energy to face many more battles in the realm of pop culture going forward.

*This article was originally published in April 2016.